Mechanical seal is a mechanical device which is used to prevent the (leakage) liquid coming from inside casing to outside through between static and rotating parts. Mechanical seals are used in centrifugal pumps. There are many types of mechanical seals used in the many equipment’s. It is classified on the basis of design, working, and arrangement.

There are two types of seal

Dynamic type seal is used to prevent the leakage between static and rotating parts of the equipment. Which rotates to each other. The application of this type of seal is used in pumps, blowers, compressors, turbines, valves, and others. 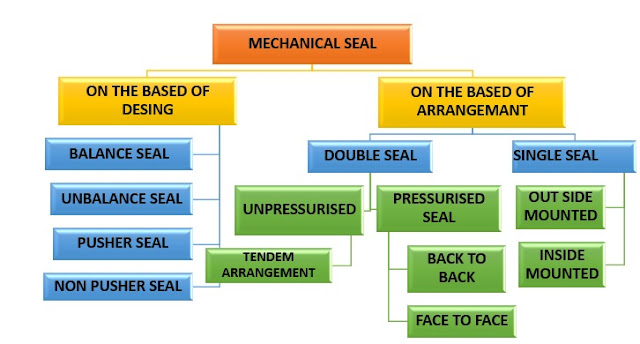 The pressure of the liquid acts on the outer diameter of the seal’s face.

Pressure of liquid acts on the inside diameter of the seal part.

In a series arrangement or tandem arrangement. The unpressurized dual seal does not require nitrogen and other inert gas. Pressure between the seal face area is higher than the seal chamber pressure, which is a minimum of 30 PSI.

The dual seal arrangement required an external seal flushing plan. Its pressure approx around the atmospheric pressure of the liquid, the face lubrication is also done by the external sources of liquid. Unpressurized seals are used for low pressure, hazardous liquids.

Double mechanical seals are used for many features

The cartridge seal is a complete preassemble of seals, flanges and other parts. it is easy to install and does not measure required during the installation. because it is Spring load is fixed during the assembly and already tested by the technician with the help of air and equipment but it is more costly than other types of seal.

The split seal is available in two parts,that is mostly axially split. The main advantage is that it is easy to install and does not require more time for installation, also reducing the downtime. But it is also more costly than seals.

Here mention the factors for the selection of mechanical seal considerations below.

What are the factor requirements for smooth operation of the mechanical seal?

What is the purpose of providing seal plans?

The purpose of seal planes is to provide cooling and flushing to seal face. and remove raised temperatures as well. a variety of mechanical seals are available in the industry. Seals are used in many types of equipment: like pump, compressors, liquid ring compressors, blower fans, agitators, valves, rotators and others.

What should be the gap between seal face?

The gap between seal faces is very small. When it is running the hydrodynamic gap is created and that gap is approx around 3 to 5 microns. There are two types of material used for seal face. For seal face, one is a soft material used like carbon, and Teflon, another one is a hard material that is tungsten carbide, silicon carbide, PTFE and

Where was the mechanical seal used?

The life of a mechanical seal is very long as compared to gland packing its maintenance time is much less. But it is highly expensive and very sensitive, because of the use of mechanical seals to save the downtime of the equipment. Mechanical seals are used in many applications like pumps, compressors, blowers, liquid ring compressors, agitators, submersibles, pumps and others.

What is the reason for the mechanical seal being used?

What is the advantage of a mechanical seal?

The primary advantage of a mechanical seal is to use any equipment for a good deal of safe operation.

Why is the cartridge seal mostly used?

The advantage of cartridge seals is more than compared to other seals. Advantage.

Why did the mechanical seal fail?

The key reason for seal failure is

What type of force is acting on a mechanical seal face?

What is the type of mechanical seal face materials?

Mechanical Equipment Any human mead machine which reduces human efforts and time. There are two types of mechanical equipment. these are listed below. Rotating equipment…

What is Blower? It is used for move process gases with moderate pressure. It also increases the velocity of process gases. Blower or fan are…

1 thought on “The Ultimate Guide To Mechanical seal part 1”