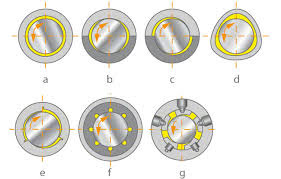 However, the sleeve bearing there are two basic types of sleeve bearings now in common use they are the single piece type and the split type of course.

a properly installed and lubricated sleeve bearing will often last as long as the equipment. It’s mounted in another variation in sleeve bearing and has to do with the thickness of the bearing.

The wall thickness can vary considerably depending on the application and the requirements of the equipment.

The bearings themselves may be manufactured from several different metals depending on their application.

It is usually made of cast iron, bronze or aluminium sleeve bearings with a shell of aluminium or bronze that may have a lining or they may not however sleeve bearings with a shell of cast iron will normally have a lining such as the Babbitt lining being pointed out. Here the lining or coating which is used in sleeve bearings may be made of a variety of materials such as aluminium, copper lead cadmium base / plated silver and Babbitt of all the different metals a tin or lead based Babbitt is the most commonly used Babbitt is an alloy made of several metals. Which is applied as a thin coating over the shell enlarger sleeve bearings for heavy-duty equipment a thicker layer of Babbitt is used to line a rigid backing of steel-bronze or cast iron you are not expected to select bearings for use in equipment the manufacturer of the equipment will specify exactly what type of bearing is to be used. This is true because sleeve bearings are often designed specifically for a certain application.

A film of lubricant between the shaft and the bearing separates the two parts during the operation, reducing friction and also helping to dissipate any heat. This is generated by the lubricant and may be introduced into the bearings by a variety of methods force feeding lubrication systems. here are used frequently to pump oil through the bearings of various machines if grease is used as a lubricant it may be introduced through one of several methods and this would include grease fittings or a grease pocket as shown in this illustration another common method of lubricating sleeve bearings with oil is the use of oil rings which pick the lubricant up out of a sump below the bearings and carry it up to the bearings as the rings rotate on the shaft?

Since there is such a variety of Lube systems in use, we won’t go into detailed explanations of how they work in this course. You should already be familiar with the basic systems now in use once the lubricant reaches the bearing itself, the bearing design takes care of the distribution of the lubricant along the shaft journal, for instance, this bearing is lubricated by grease, the grease is forced downward by gravity through a slot at the top of the bearing until it comes into contact with the shaft. You won’t encounter this type often since most sleeve bearings are lubricated with oil and not greased oil lubricated bearings are a different story, a force-fed Lube system in which the oil reaches the bearings and is distributed along the shaft through oil grooves. Which is machined into the surface of the bearing itself the workman is now pointing to one type of groove known as an axial groove? 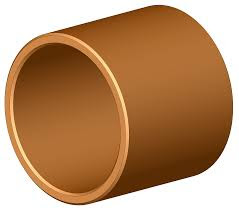