Pressure Safety devices (valve) is the safety device that is used to protect the other equipment and piping system. This is used as a protection device for mechanical equipment and other systems. The Pressure Safety Device is designed to open and release the excess pressure from the system after that again recover to its original position if the operating pressure is achieved. This is also used as last line defense

Equipment but Every Pressure Safety Device must be inspected and tested on fix intervals so that we will ensure PSV is capable of functioning properly as per its designs in all circumstances. This is a type of valve but PSV is not used as pressure regulating or isolating devices for the system that is only used to prevent the other equipment and systems. Its only purpose is to relieve overpressure of the equipment and system.

Mostly pressure vessels and unfired steam boilers shall be protected by a pressure relieving device that shall prevent from rising pressure more than 10%. Or 3 PSI whichever is greater above the MAWP or Design pressure. It is also called a pop-up valve, that can operate at any time for a given specific condition. The PSV is a fully automatic operated mechanical device. Mostly there are two common types of PSVs used in the industries. One of the spring-loaded types and another one is Pilot PSV.  Some important Pressure Safety Device terminology used during the selection like MWAP, back Pressure, Design Pressure, operating pressure, set pressure, overpressure, accumulations and blow down. 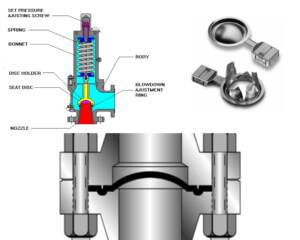 Types Of Back Pressure

Superimposed back pressure is the pressure in the common discharge header line before the particular safety relief valve opens (This is created only when more than one relief device discharges into a common header).

Built up Back Pressure:

Built up Back Pressure is the pressure in the discharge header, which develops as a result of flow after the safety valve relief the excess pressure from the system.

Inlet gauge pressure at which the pressure relief valve is set to open under service condition and this is a pressure where the system goes to depressurized.

The pressure at which the pressure relief device is set to open on the test bench during testing of PSV.

The pressure at which the disc re-establishes contact with the seat after releasing the overpressure. When the system operating pressure and safety valve set pressure is very close to each other.

Difference between the set pressure and the closing pressure of the safety relief device. And that is expressed as a percentage of set pressure. The blowdown values are already defined in codes and standards which are -7% and -10%, ranging from -4% to -20% depending on the code and service preferences; it varies for different fluid services (steam, gas or liquid).

How many types of Pressure safety valves are used in industries.

Types of Pressure safety devices which are mostly used to protect the system from depressurized.

Some of these are as follows:

Where pressure relief devices are used?

The PSV is activated by the static pressure. And, who’s opening is very rapid? In pop-up action.  And that is used only for compressible fluids. Services. Like gas, buffer streams.

Pressure relief valve (PRV) It is also actuated by static pressure. Opens generally  in proportion to overpressure, that is used only for non-compressible fluid media liquids.

It is also operated like a pressure relief valve And mostly used for relieving the pressure due to created by thermal expansions. Pipelines block isolated conditions

It is a type of mechanical equipment which is used for very sensitive systems. The main part of the equipment (RD) is disc. When system pressure starts rising and reached at the top, The Rapture disc will be brust at the predefined pressure limit. But it does not be used again. A predetermined weak point in a pressurized system, opens at burst pressure, does not re-close.

A pilot-operated valve is a type of relief valve that is also used to protect the system from over-pressurization . It is a self-contained and operated system it does not need external power or pressure to operate. This type of valve is used with liquid storage tanks or other process vessels to prevent structural damage during depressurize or vacuum of the system.

ral part? Of the system. And that is mostly used for clean services, where operating pressure is close to. The system City pressure. Here are some of the most important terminology given, which is used during selection and properly. Overpressure: The excess pressure over the set pressure of the safety valve.

Operating pressure: The pressure at which the system works under normal operating conditions.

Set pressure: The pressure at which the disc begins to lift and the safety valve opens.

Lift: The distance that the disc has moved from closed position to the position required for discharge.

Back-pressure: The pressure built up on the outlet of the safety valve during the flow.

Built-up back pressure: The pressure at the outlet once the safety valve has opened.

Superimposed back pressure: The pressure at the outlet of the closed safety valve.